CUWR English is continuously updated worldranking, meaning constantly updated world rankings. Of course, this rank is also ranked by the UIAA and ICC-recognized world rock climbing event rankings such as the World Cup and the World Championship, but the CUFR system has added the FIELD FACTOR. This parameter describes the pooling rate of the world's masters in the game. The more masters, the greater the value of the parameters, that is to say, the ranking obtained in a master game has a higher gold content. Obviously, this method of calculation is more relevant and more equitable than reality.

The competition weights parameter calculates the attendance rate of the top 30 players in the world rankings in this competition. We know that different ranking players are given different scores. For example, the first place is 100, the second place 80, the third place 65, until the 30th place score is 1 and so on. In calculating, we have to add 15 points to each player's score, which may be to make the player ranked behind to get a larger proportion. In this way, if all the top 30 players get together, we should get a score of 100+80+65+Â·Â·Â·+1+15Ã—30=1268. In this case, we think the match weight parameter is 1, similar to this, if we get The total score is 839. We say that the weight factor of the event is 839/1268 = 0.66.

Using this parameter multiplied by the points that are inherent in each position, we get the points that the player in this game obtained to add to his CUWR system. For example, when the parameter is 0.66, the final effective point of the champion is 100 x 0.66 = 66 points, and this 66 points will contribute to his updated global ranking.

Since the tournament weight parameters come from the ever-changing list of world's top players, how does the origin of this computing system begin? From which game has been calculated, what are the parameters of this game? In fact, this kind of starting can only be established directly by the rules, and it will not be caught in the chicken-and-egg cycle. The CUWR start value is the first five UIAA world games in 1991, including four World Cups and one tournament, with a score of 0.60 per game. In this way, the total scores and overall rankings of the players of the world at that time were laid, which laid the foundation for the calculation of the weights and scores of the tournaments.

Another point is that not all of the player's tournament points remain valid. Because if this is the case, a person who has won a five-year championship may still occupy the list after quitting the game. The current rules stipulate that each player's total ranking points will be the sum of the valid points for all matches in the period of one year from now on. Therefore, the CUWR system not only changes with the replacement of the game, but also changes with time. Results that have continued for more than one year will continue to fail and be discharged outside the system.

It is these characteristics that make the CUWR ranking system a great improvement over previous rankings, making it more universally recognized by rock climbers.

The following is an example of the 93-year ARCO competition. Explain the CUWR calculation method: 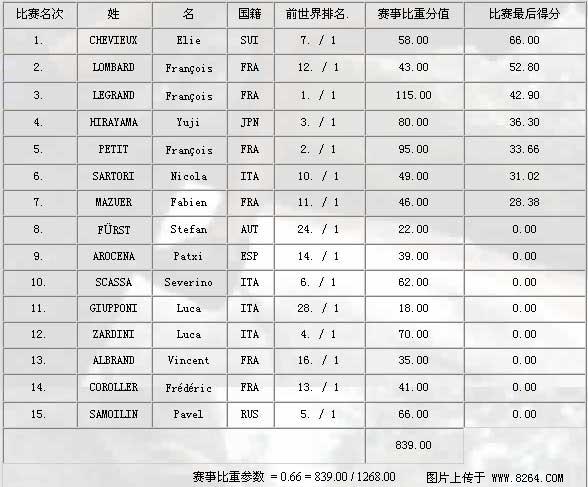 Note: There were only 15 people in this competition. According to the scoring method of 99 years ago, half of the former players could get points, so the latter eight people do not have points. After 99 years, all players can earn points.

We study the rankings of the world before the game, and convert their rankings into proportions and scores, and then calculate the weight factor of the event to be 0.66. The first place's CHEVIEUX score is 100Ã—0.66=66. The name LOMBARD score is 80Ã—0.66=52.8, and so on. After this competition, the rankings of the world's total rankings will also change in order to continuously update them.